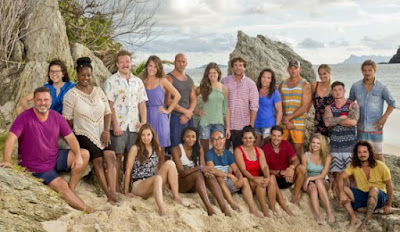 So not to long ago Survivor started a new season called Game Changers. I absolutely love this show! I've watched since season 1! So when I saw that it was coming on again of course I made sure that my Wednesday nights included watching Survivor.

I was going for 2 guys that were BOTH my absolutely fave ones darn it and sad enough they are both gone now!! I was rooting for Caleb since he got taken out last time because of a medical emergency which was pretty scary! And sad enough he got taken out on the 9th day I believe it was again this season ... hoping that whatever they do for the next season of Survivor that Caleb can and will be a part of it! I think he has potential if they would just give him a chance! I was also rooting for Malcolm. Not only is Malcolm a hottie but, I just liked the way that he plays the game. I have always loved those 2 so when they were voted out I was ticked!

Now with that being said...I am SO thankful that this last week that they flipping chose Sandra's sorry butt to leave and Tai considering that Tai has not one but TWO idols!! And he didn't play either of them!!! That was a flipping HUGE ballsy move to say the least considering he started up some ruckus at the tribal meeting and then his name was put down as well but, thankfully they voted more for Sandra!! YES!! Send her stupid butt home!! She was SO irritating with the "I'm Queen blah blah and you can do this that and the other and the Queen is still here blah blah!" yep I did NOT like her one bit!! Her attitude just sucked to me and besides that she was a huge threat considering I don't think that she really did anything she just scooted on by and she won the last 2 times she was on! so she didn't need to be on again and win! She didn't do anything except play her attitude with I'm all that attitude! She's always just rubbed me the wrong way!

I love Tai but, yea I think that he was crazy to start up the ruckus that he did and then to NOT play the idol!! Wow that was just LUCK!!!! He is one lucky guy figuring out and finding BOTH of the idols!!! GEEZ!

The other one that I don't like is Debbie...she's just a whining ass old hag in my opinion and she rubs me the wrong way as well! She needs to GO! She isn't doing anything for anyone except bringing them down and she doesn't need to be there. Just my opinion.

I like Ozzy and Audra and maybe a couple of others that I don't love nor dislike but, not too sure who to root for completely since the 2 guys got out. I'll go for Ozzy and Tai and Audra...I don't think that Zeke is that bad or Varner...as for the others either way...