Blog Tour for I've Been Looking For You

I've Been Looking For You by Jennifer Dean Genre: YA Contemporary MAX: The new girl, the sarcastic asshole, the one who avoids getting attached to anyone. EMILY: The golden girl, the rule-abiding rebel, the one who unknowingly craves something more. When fate brings the two girls together, life seemed to fall into place. Until their future plans are shattered the moment someone leaves drugs inside Max's school locker.  While Max inevitably loses hope of escaping her new grim reality, Emily struggles to move on without the one she loves most. Especially when she’s the only one determined to find answers. But the closer Emily gets to discovering the truth, the harder it will be to stop her pursuit, even when it leads to dangerous consequences. Goodreads * Amazon I was never that child you found in the corner reading. In fact, I loathed the idea of picking up a book. The activity seemed more of a chore than a past ti
Post a Comment
Read more

Blog Tour for The Peradon Series

Phoenix The Peradon Fantasy Series Book 1 by Daccari Buchelli Genre: YA Fantasy  No power is greater than the one you’re willing to sacrifice.  Princess Violetta Flame lives her life according to rule, but those rules require her to pay a heavy price. Haunted by a devastating loss, she longs for freedom. When a handsome ruler takes a special interest in her, she senses greater things lie ahead, but behind the handsome façade lies a dark secret – one that can usurp her efforts and cast her back into the life she detested. The throne was never promised to Emperor Ryore Frost, but now that he has ultimate power, his world is filled with possibilities. Citizens bow at his feet, but their fleeting adoration is no match for his obsession with the young Flame Princess. As his feelings for the staunchly independent princess grow, a new threat emerges, bent on undermining his efforts and betraying his sensibilities. When past tragedies, malevolent beh
Post a Comment
Read more

Tour and Giveaway for Winner Take All 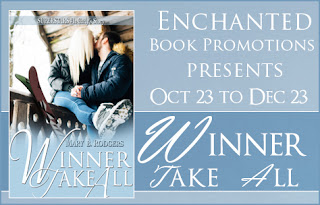 About the Book  Title : Winner Take All Author : Mary Rodgers Genre: Contemporary Romance Hot shot skier and unrepentant party girl Carly Carrington is on top of the world until a disastrous crash destroys her championship dreams. Can she lower her guard long enough to trust the one man who might be able to heal her body...and her heart? When it comes to sports doctors, buttoned-up Paul Blackburn is the best of the best. But when Carly upends his carefully ordered little world, will Paul fight his one chance at true love, or go for the gold in… WINNER TAKE ALL. Author Bio   A career performer and storyteller, Mary was the keyboardist and lead vocalist in an all-female rock band for a number of years, and has acted in leading roles in plays and musicals across the globe. Her first screenplay, Common Ground, was a finalist in the Moondance International Film Festival competition, and she is a member of the Screen Actor's Guild/AFTRA an
Post a Comment
Read more
More posts