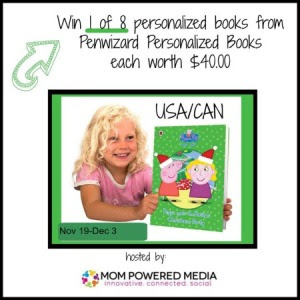 Sponsor: Penwizard Host: Mom Powered Media Personalised books are great for getting kids involved in reading. You Can choose from our range of personalised childrens books and see your child in the pictures and story of their own personalised book!    Penwizard is an amazing company. They offer a wide variety of books for both little boys and girls. The nice thing about their books is that you can literally customize the books to fit whatever your child looks like AND put in their name! These books are so easy to create and order. They are also pretty reasonably priced. They range in the 14.99 to 19.99 UK (so about 30-40$ Canadian). Considering your child is going to be able to have that book for the rest of their lives thats a pretty good deal! Check Penwizard out HERE Penwizard has offered 8 fans a chance to win a personalized Peppa book for themselves (a 30.00 Canadian Value each!) Rules: Open to USA/CAN 18+ ends Dec 3/14 one person per household
Post a Comment
Read more

Cache a Predator is a geocaching thriller about a father’s love, justice, and the unhinged game of hide-the-cache. Officer Brett Reed will do anything to gain custody of his five-year-old daughter, Quinn. But when a judge grants Brett's drug-addicted ex-wife custody and slaps him with a protective order for losing his temper, he fears for Quinn's safety. Who will protect her now? When Quinn is found abandoned on the streets, she's placed in a temporary foster home until Child Protective Services can complete an assessment. It should only take a few days. But a lot can happen in a few days. Especially when there's a deranged psychopath on the loose, someone who's attacking pedophiles, someone who wants to protect children like Quinn, and someone who's planting body parts in geocaching sites. This book is hidden in cache sites all over the US and Canada with the goal for it to travel to all 50 states. It’s mission is to spread awareness of child
2 comments
Read more

Welcome to my our Tis the Season $100 Amazon Gift Card Giveaway Sponsored by Get My Wish Hosted by Bonkers4coupons Since the Season of Giving is approaching, it’s a perfect time to tell all about Get My Wish and the services they offer. During this time of the year, folks love finding those caring and thoughtful gifts that we all love to receive. Giving back to your community or charities is something I take pride in doing. No gift goes unnoticed specially when you donate to a Charity. There are plenty of people in your very own community that would love your help and support specially during this time of the year. At Get My Wish, your gift really counts. I know from my own experience, that unpleasant feeling is receiving a gift that you can't use or you might already own. Get My Wish offers a service to help share your desired gifts to your family, friends and co workers. By simply creating a free wish list from the Get My Wish website, you have the ability to email
Post a Comment
Read more

iPad Mini Holiday Giveaway Event 11/16-12/14 Welcome to the iPad Mini Holiday Giveaway Event sponsored and co-hosted by by MyPoshMedia.com | Poshonabudget.com | PlusSizePosh and Mel from FreebiesCodesCouponsAndDeals | Woman in the Man Cave | Deliciously Savvy | West Coast Mama Win an iPad Mini!-About this Apple iPad mini 16GB with Wi-Fi gives you all the features of an iPad but in a slightly smaller form. With a 7.9-inch LED-backlit display and an A5 chip, the iPad mini 16GB delivers a beautiful screen with a fast and fluid performance. Featuring a 5MP iSight camera with 1080p HD video recording and FaceTime, you can snap pictures, take video and talk to loved ones on a platform that fits in the palm of your hand. The Apple iPad mini 16GB with Wi-Fi has ultrafast wireless that gives you access to high-speed cellular data networks around the world. With up to 10 hours of battery life, the iPad mini 16GB gives you the freedom to work anywhere, anytime. The
Post a Comment
Read more
More posts