Trees across the street fell in front of the neighbors house 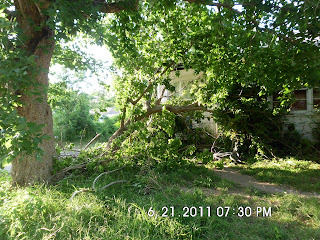 Trees down everywhere and limbs everywhere. Along with poles broke in half??!! They had to replace our line and then go and fix a pole to get us back up and running goodness what a mess!!
Post a Comment
Read more

Without Electricity for 15 hours!!

By Unknown - Tuesday, June 21, 2011
Good grief it is so crazy how things happen. We were doing fine last night, the wind had been blowing a little, not a whole lot and there wasn't any rain or anything like that and no severe warnings or anything but a lot of wind and sure enough it made the electricity blink a couple of times right after each other and then it went out and didn't come back on until 3:30ish today!   And to top it off, the lady on one side of us called in 2 times to report the outage and the neighbor on the other side of us called in 4 times and I called in 3 times and then it turns out that the trucks came down the street to put up another wire that had gotten knocked down and we got a call asking if we had electricity and we said no and then the trucks came here at our corner and replaced the wire and when that didn't work they went somewhere else to fix it and then it came on. But the guys didn't even know that we were without since midnight or so last night!! That sucks! But tha
Post a Comment
Read more

By Unknown - Sunday, June 19, 2011
Happy Father's Day to all the great father's out there. I am very lucky, blessed and thankful to have a father who isn't my "dad" but has taken me as his daughter for as far back as I can remember. Thank you to him for being here for me through out the years. He means the world to me.
Post a Comment
Read more
More posts