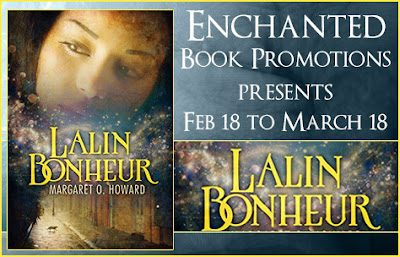 About the Book Title: Lalin Bonheur Author: Margaret O. Howard Genre: Paranormal Mystery / Romance When Lalin Bonheur shape shifts, she roams the Vieux Carre as a sleek tuxedo cat to learn the secrets of her city. But on her debut at a Quadroon Ball in 1830 this octoroon beauty meets and falls in love with French aristocrat, Etienne Legendre. Etienne becomes her protector and he soon learns that his mistress leads a second life as a healer and voudou priestess. Their story takes a bizarre turn after Lalin's protector marries. His wife, Minette, dies mysteriously and he is charged with murder. Lalin concocts a zombie potion to assist him in his escape from jail. The couple sail upriver to hide until they can prove his innocence. But their struggles only become more challenging, when they face the fearsome loup-garou (wolf men of Louisiana) and then a giant bird. Lalin must use her magic to battle these monsters. But it's what she learns about
Post a Comment
Read more

Welcome to the Your Lucky Day Giveaway Hop brought to you by The Hopping Bloggers ! Hosted By: Mama Smith's & Women and Their Pretties Co-Hosted By: Everyday Life   Each giveaway has a value of a minimum of $15, however some are worth much more. Be sure to enter to win all of them because there is no limit to how many you can win. GOOD LUCK! Enter below for a chance to win my giveaway for winners choice of either a $25 Amazon gift card or $25 CASH via Paypal!! Entry -Form Tweet LISA-QUEEN OF RANDOM claims no credit for any images posted on this site unless otherwise noted. Images on this blog are copyright to its respectful owners. If there is an image appearing on this blog that belongs to you and do not wish for it appear on this site, please E-mail with a link to said image and it will be promptly removed
3 comments
Read more

Burned By Kimberley Patterson Genre: Suspense, Mystery “ Pay attention to the signs that are all around you,” Sarah's mother used to say. Sarah never listened until her world turned upside down in the wake of her mother’s death. When sifting through the fiery ashes, signs begin to appear, giving her the feeling that the accident was less of an accident and more of foul play. While Sarah struggles to understand the images haunting her dreams, she finds herself losing a grip on reality. Based on true events, Sarah unravels the mystery surrounding her mother's death, and, in doing so, uncovers an internal darkness capable of murder.  Goodreads * Amazon Horses were one of my first loves, and writing soon followed. As a child, I spent hours writing poems, and short stories (about horses). My parents realized that I was horse-obsessed and decided to buy me one after taking riding lessons for two years. I think they hoped that all of the hard wo
2 comments
Read more

***     Smart and sexy Elise Donovan has made a career of fixing things. With a reputation for being the best in the business, her team is often pulled into front page headlines that need to be handled. After being away for six weeks attempting to repair a company just coming through a hostile takeover, time with her team at a luxury retreat is all she wants right now.   It’s no secret Reid Beckett is a serial player who only plays by the rules in business. At a retreat to announce the merger with his best friend’s company, his inability to stay away from the spunky brunette who is soon to be his employee has him questioning if rules really are made to be broken. Vying for leverage Elise and Reid find themselves battling over who runs things in the boardroom and in the bedroom. Struggling to relinquish power for trust in their relationship, will they be able to leave the rules behind to find their Sunday loves?   ***     ***
Post a Comment
Read more

Rebirth Tattooed Angels Trilogy Book 1 By Valerie Willis Genre: Urban Fantasy High school life is almost over, but Hotan's life as an immortal has only just started... Already struggling with a mountain of hardships, Hotan is just trying to get his diploma as his mother had always insisted. Friends know if he's not at home or at the club playing in his band, you can always find him thinking at the old broken down church. Basking in the moonlight, Hotan finds himself under attack by an immortal named Geliah, the element of Fear. Talib, the element of Judgment, interrupts the fight, furious that Geliah would force Hotan to awaken his own abilities and immortality. Normally when pulled out of the reincarnation spell, an immortal would remember whom and what they were, but he is not the Hotan from the Past. Walk beside him as he struggles to keep his chaotic life in order as he tries to break the secrets of his own element, Rebirth. Goodreads * Amazon
Post a Comment
Read more
More posts