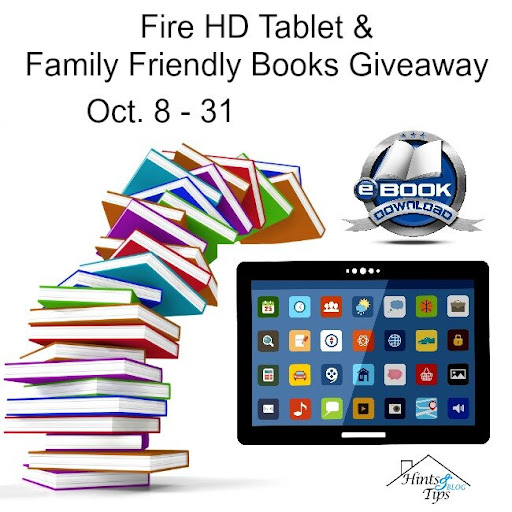 Enter for a chance to win a Fire HD Tablet and 12 Family Friendly Books! 1 Very Lucky Winner!        About the prizes The Tablet First there is an All-New Fire HD 8 Tablet, 8" HD Display, Wi-Fi, 16 GB - Includes Special Offers, Choice of color (black, pink, blue, tangerine) dependent on availability. There are many features and I encourage you to check out the link. You can expect up to 12 hours of battery life, 2x the storage and faster performance. Amazon Underground app store. 16 GB of internal storage. Free unlimited cloud storage for all Amazon content and photos taken with Fire devices. The part I love is that you can add a microSD card for up to 200 GB of additional storage. If for some reason you do not want the tablet you may choose a $75 Amazon gift card instead. NOTE: Amazon is in no way affiliated with this giveaway. The Books Here is the list of books you receive if you are the winner. Please be sure to click on the link and check them out. To the
Post a Comment
Read more 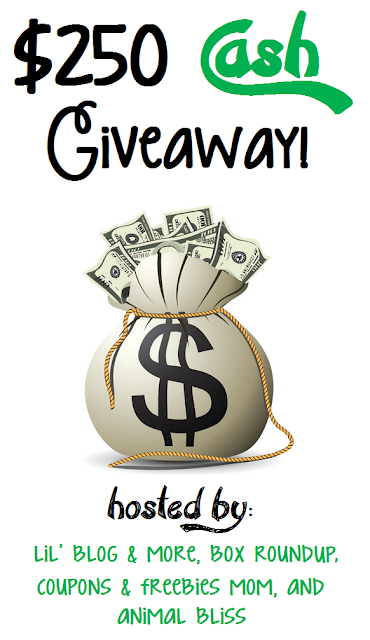 Welcome to the $250 Cash Giveaway Event!  Hosted by: Hosted by: Lil' Blog and More , Coupons and Freebies Mom , Box Roundup , and Animal Bliss . With the holidays right around the corner, this great group of bloggers wanted to get together, to give one amazing prize, to one lucky winner!  Good Luck! The Giveaway! One lucky winner will receive $250 CASH! Enter with the GiveawayTools form, below: Entry -Form   Disclosure: The bloggers involved in this giveaway were not compensated, and are not responsible for prize fulfillment. Lil' Blog and More will be sending the prize out. Must be 18 years of age or older to enter this giveaway. This giveaway starts October 4th, 2016, and will end on October 29th, 2016 at 11:59 pm. The winner will be emailed, and have 48 hours to respond, or a new winner will be chosen. Once a winner is drawn and confirmed, the name will be announced on the GiveawayTools form. Tweet LISA-QUEEN OF RA
Post a Comment
Read more Welcome to the IL VOLO WITH SPECIAL GUEST PLÁCIDO DOMINGO NOTTE MAGICA – A TRIBUTE TO THE THREE TENORS Giveaway   IL VOLO announces the release of their new album Notte Magica – A Tribute to The Three Tenors with special guest, the legendary Plácido Domingo . The new album will give fans around the world the chance to re-live and experience this once-in-a-lifetime event.   Maestro Domingo conducted the orchestra of the famous Teatro Massimo di Palermo in eight pieces that evening, and he also joined Il Volo to sing “Non ti scordar di me.” Maestro Marcello Rota alternated with Maestro Domingo as the conductor. The members of Il Volo – Piero Barone, Ignazio Boschetto and Gianluca Ginoble – performed songs that encompassed popular Neapolitan, Italian, and international music, blending in complete harmony with songs from famous musicals and renowned classical opera arias.   On July 7, 1990, José Carreras, Plácido Domingo and Luciano Pavarotti sang together for th
Post a Comment
Read more

First Check Diagnostics, LLC is committed to being the leader of the highest quality home diagnostic test kits assisting people to live safer, healthier lives. Not only do they continually strive to provide you with new and innovative products but want to give you the answers you need in the privacy of your own home. They make it easy for parents to have peace of mind, or find the help that they need if their child or a loved one has a drug abuse or drug addiction problem. Be sure to view the videos on YouTube to find a wealth of resources and information on getting help for loved ones or for yourself . Not sure what a particular drug is? You can find the most common drugs and a description on First Check® as well as a listing of commonly used slang terms to describe a variety of different drugs that you may have heard your child mention. Parents, if you find yourself in a similar situation as we were, please don’t wait . Visit the First Check® website today and check
Post a Comment
Read more

Welcome to the Dropprice $150 Target Gift Card Giveaway! Dropprice is an innovative startup that rewards moms for being social. Essentially, they empower moms to drop prices of kids & baby products with a click. The price continues dropping as more moms click “Drop the price”. Every week new promotions are launched and moms drop prices by sharing them on social media. See the chart below to understand the power moms have and how important it is to share with other moms. In today’s promotion for the PackIt Freezable Lunch Bag, it started out at $19.99 and for each mom that clicks, the price drops a bit. The price will continue to drop for each mom that participates. You can choose to share on social media to get more moms to click “Drop the price”, or you can “Buy Now” at the current price. Keep in mind that when the price gets low, they usually sell out and you will no longer have the chance to buy that item. As an added bonus every item on Dropprice ships for free! D
Post a Comment
Read more Singer & Trumpeter Bria Skonberg CD Giveaway Okeh Records announces its first release from singer, trumpeter, and songwriter Bria Skonberg . With a unique fusion of modern-day pop sensibility, combined with sizzling musicianship, Skonberg makes a firm claim on fresh territory in the sophisticated pop landscape pioneered by Harry Connick Jr., Diana Krall, and Michael Bublé. Titled Bria , the album features standards plus five original songs and is available September 23.   Skonberg aimed for “a sense of allure” on her new album, “music that is both curious and exotic, playing with tension and storytelling.” She credits producer Matt Pierson with helping her tie together the best aspects of the music she’s been exploring, in a quest “to fuse my love of classic jazz with worldly rhythm, percussion, contemporary songwriting, and more.   Bria is supported by some of the top musicians on the New York scene: Evan Arntzen on sax and clarinet, drummer Ali Jackson, bassist Reginald
Post a Comment
Read more

Blogger Opp ~ The "Say It With Krusteaz" Fall Baking Bundle Giveaway ~ Sign Ups Close 10/09 ~ #Free & #Paid Options Available Deliciously Savvy is Hosting a Giveaway in which one lucky winner will receive all of the items pictured above. It is the "Say It With Krusteaz" Fall Baking Bundle! There are Free & Paid options available to sign up to promote this delicious giveaway today! As Always, Thank You For Working With Me. Sponsored By: Krusteaz Hosted By: Deliciously Savvy Co-Hosted By??? FACEBOOK ~ TWITTER ~ PINTEREST ~ INSTAGRAM THE DETAILS: 1 Lucky Winner Will Receive: 2 Boxes each, of the following mixes: Buttermilk Pancake Mix, Blueberry Pancake Mix, Pumpkin Spice Pancake Mix, Pumpkin Spice Muffin Mix, abd Cranberry Orange Muffin Mix. 1 Krusteaz Branded Tote Bag 1 Krusteaz Oven Mitt 1 Krusteaz Delfie Stick Now Deliciously Savvy Needs Your Help Promoting Because As Always, I Can Never Do It Without Each and Every One Of You!
Post a Comment
Read more
More posts