Twittering for a good cause

Friday, April 17, 2009 Twittering for a good cause Current mood: good Category: News and Politics Scott Case CEO, Malaria No More Co-Founder Priceline.com This week, the world discovered a new and powerful weapon in the fight against malaria: Twitter. The social networking and micro-blogging tool mobilized a million people to battle the disease by helping Ashton Kutcher be the first to reach one million Twitter followers—saving lives, 140 characters at a time. Earlier this month, Ashton decided to help raise awareness about malaria for World Malaria Day on April 25th. To do so, he leveraged his popularity on Twitter to spread the word and encourage his followers to donate $10 mosquito nets at www.MalariaNoMore.org. This sim
Post a Comment
Read more

Friday, April 17, 2009 Horoscope today for Pisces Current mood: good Category: Life Got this off of my cell walla go... And it says Pisces April 17 Don't try to create the day you want to live today--let it all unfold around you. And yes that is what I am doing...just living life.... 9:10 PM
Post a Comment
Read more

Are you twittering?? Current mood: fabulous Category: Life Good evening everyone. I hope you all are having a great night. Mine has been pretty good. I watched Ashton on Oprah today, its pretty cool that they got Oprah tweeting :) its wild!! I loved it once I got ahold of the site and got on there, I was shy at first to it but then I just got on there and wrote my short little thoughts and I think that is the best part, its limited to 140 characters..do you know how much you can fit in 140 characters? lol..quite a bit if you try hard enough..hehe I try to fit sometimes as much as I can or continue it.. I also just watched Larry King and saw Ashton, PDiddy and jimmy Fallon on there. That's pretty cool. I love that they are celebs but that they are wanting sometimes needing our
Post a Comment
Read more

Friday, April 17, 2009 Our Race to 1 Million! http://www.thelittleseed.com/blog/?p=580 Powered by ShareThis This is the video of Ashton winning the race to 1 million against the CNN Brk 6:02 PM
Post a Comment
Read more

By Unknown - Friday, April 17, 2009
Hey there everyone, well I was trying to get a new layout but none of them are working for me. Can anyone tell me how to get the pictures that I want to post on here smaller? They seem to take up alot of room and I can't fit them on here.
Post a Comment
Read more

PIcs of my daughter's cake 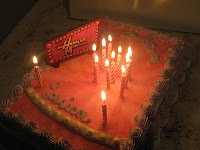 All in all a pretty good day :) Current mood: content Category: Life My daughter had a great birthday!! She said it was the best one yet!! She had fun, she got her clothes that she wanted off of ebay and me and her are going to spend the day together Saturday out and about so that will be fun. She blew out her candles all in one breath :) She put them on there and even had 2 of them at the bottom away from the others and still got them all out! I got it on video!! YAY!! So I will share that. I am going to put up pics of the cake to. Hope that everyone had a great night. Besides the thunderstorms coming through and giving us a ton of rain in a short amount of time again were all good. Got a video of that to..hehe :)
Post a Comment
Read more

A Pulling sensation in me pulling on my belly button!!

Thursday, April 16, 2009 A pulling sensation in me pulling on my belly button...weird! Current mood: content Category: Life A strange feeling pulling on my belly button from the inside??!! I hadn't had this feeling since back in Sept-Oct when I was pg and lost it soon after. Now this is happening again. I know that I'm not and can't be pg so Leon looked it up on search and some others both men and women according to him have the same sensation but theres goes from the belly button down. Mine doesn't. It just goes like from my belly button back...weird!! This time it didn't last that long, but almost had me in tears with pain!
Post a Comment
Read more

Thursday...almost Friday!! YAY Current mood: blessed Category: Life Good afternoon everyone. I hope that you all are having a wonderful day. Mine is going all right. Woke up with a headache but took Excedrin migraine and its faded way out so I am very thankful for that. Today is my daughter Jessica's 12 birthday!! I am in shock that shes growing up so fast. Shes my only daughter and I'm very protective of her and can't believe that shes almost a teenager! Leon is fixing to go do his plasma and after go to Wally world and pick up her cake and candles. Me and her are having a mother daughter day Saturday. I am planing to take her to the mall and then surprise her by taking her to go see the Hannah Montana movie. She loves her and I'm sure she will enjoy herself. And of course I wi
Post a Comment
Read more

Happy Birthday to my daughter Jessica and one of my best friends Jill!!

By Unknown - Thursday, April 16, 2009
Today is my daughter Jessica's 12th birthday and also one of my best friends Jill's birthday!! Happy Birthday Jill!!! Love ya!!! Hope you have a great day :)
Post a Comment
Read more

Hire or get hired to do projects on GetaFreelancer

By Unknown - Tuesday, April 14, 2009
Hey there everyone, if your a Freelancer of any kind looking for a project check out GetAFreelancer.com You can also be a person that needs a Freelancer, you can go there and list your project and get qualified people to bid on the project and then you take your choice of who to hire. GetaFreelancer.com
Post a Comment
Read more

By Unknown - Monday, April 13, 2009
We have a variety of services including hosting and domain services. We offer reliable and affordable services. Please take a look at our site for more information. Prices start at $6.50 a month. Take a look at what we have to offer http://www.14all.com
3 comments
Read more
More posts