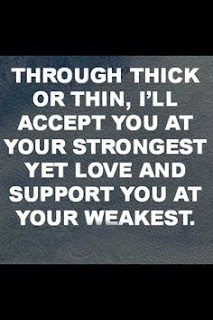 Hi everyone, thank you for coming to my page and reading my story. I have been married to a man for 20 years this coming Valentines Day. We have been through it all to say the least, we were separated close to a year and then crap hit the fan last year in Aug. I guess because of all the shock and stress and not wanting to believe and or deal with the things that were going on in my life dealing with him, I blocked it out of my mind until the beginning of this year 2014.

He ended up going to jail in Aug of last year and towards the end of the year he had wrote me a letter but I was so stubborn and in shock etc that I didn't care to read it or care about what he had to say etc. I was in a very negative and dark place with dealing with him and that situation.

So this year at the beginning of this year 2014 I made the goal to be there for him. After all he is my husband and he has no other family besides me and the kids. His "friends" left him and won't have anything to do with him.

So I started writing to him and the FIRST letter I wrote at the beginning of the year, I told him that I didn't want any negativity from him and no pity parties! I wasn't going to go down that road again. I don't like being negative, I don't like being around people that whine, moan and groan and all they seem to do is gripe and be negative about what's wrong in their lives and what's going wrong and what they don't have instead of being thankful, grateful and appreciative of what they have in their lives! They just dwell on all things negative and I've decided that's not what I am going to put myself or my kids around. So I told him that I would be there for him as a friend first and go from there and he wrote back and said that he appreciated that and would be positive only.

He went to court in April of this year and I saw him, broke my heart! He ended up signing a please 10 in 10 out on paper and 10 which equals 2 I believe probation when he gets out. Its a felony for him and this is his first ever charge otherwise no trouble...NONE!

Now months later he sits in a minimum security prison in Oklahoma. He's hours from me and I can't see him as much as I want too or would like too,

I had planned to go visit him a few weekends ago and that's when my car's engine light decided to come on and throw a curve at me! So I didn't get to see him that day! He called late the morning since I was supposed to be there early and just wanted to make sure I was safe and sound. He's a good man who made an idiotic stupid mistake as all of us do from time to time.

It's important for us to write to each other and keep in contact as much as we can. So we've decided that letters and writing each other ar couple of times a week is essential! We have phone calls and one day I will make that 4 hour drive to visit him!

That is my situation and why I've made Prison Wives Unite is to share things with each other. Our good times and bad and just keep each other going and be a support to each other.

So if you would like to share your story/situation or maybe have questions or want advice etc. Share with me on the fanpage and I'll post it anonymous and see what others have to say to help with whatever it is that you need support with.


LISA-QUEEN OF RANDOM claims no credit for any images posted on this site unless otherwise noted. Images on this blog are copyright to its respectful owners. If there is an image appearing on this blog that belongs to you and do not wish for it appear on this site, please E-mail with a link to said image and it will be promptly removed
My story Prison Wives Unite