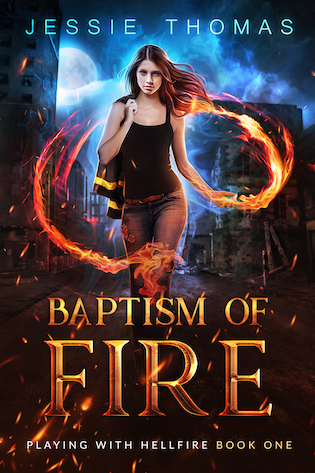 
Welcome to Perdition Falls, New York: where arson is considered a recreational activity, the abnormally hot climate makes everything unbearable, and according to one origin story shrouded in myth and legend, our city is an actual Hellmouth.
I’ve learned those infernal tales aren’t just a cheap marketing ploy to lure in tourists and paranormal frauds.
It’s Hell. We’re literally sitting on top of Hell. Fire, brimstone, actual demons–the works.
When an incendiary–the name other pyromancers have given to the infestation of Hellfire-wielding demons–kills my closest friend and fellow firefighter, I’m left with a rare power I barely understand. It’s the only reason I survived. It also makes me a target, something to be coveted by those who know Perdition Falls’ most dangerous, well-kept secrets.
While a demonic arsonist puts the city’s resident pyromancers on edge, I’m reunited with my long-lost childhood friend Javier, who shares the same strange power that runs through my veins. With him, I find my footing in a place I thought I knew and buried memories from our past start to resurface. As our ragtag group comes together, we become the last defense against the incendiaries’ corrupt hold on the city…one completely disastrous mission at a time.
But taking down this homicidal demon with a flair for pyromania might mean trusting one of their own.
BAPTISM OF FIRE is a thrilling, slow burn urban fantasy perfect for fans of McKenzie Hunter, Annette Marie, C.N. Crawford, and K.F. Breene.

Goodreads / Amazon
—
EXCERPT:
There was no way to know for sure how long I’d been out. It could have been moments. Maybe two minutes or five. I blinked slowly, staring up at the gaping hole we’d dropped through that was now barely visible through the layer of blackening smoke, afraid to move as my body regained consciousness. Everything hurt. That was the first thing I felt—the pain of bruised, strained muscles, the agony that had traveled up my left side.
The next thing was the heat. The upstairs hallway looked unrecognizable now, a narrow passage engulfed in fast-moving smoke and an inferno that blazed up the walls with an overpowering intensity that shouldn’t have been possible. I’d sweated through my clothes, the fabric drenched, my skin and hair dripping with salty perspiration. My helmet had rolled away somewhere during the collision with the floor, and I knocked into Moretti’s with my elbow once I finally decided that lying there waiting for the house to come down on top of us wasn’t that great for self-preservation.
Shit. Moretti.
Over the steady whoosh of the flames demolishing the rooms around us, I heard the melodic chirp of his PASS alarm. A noise I dreaded hearing, a source of nightmares.
And it got me moving.
I sat up and almost regretted it, black spots dancing across my vision as a blinding, gnawing pain spiked through my side. Like it had torn its way in deep, shredding muscle and tissue and causing serious damage. With a shaking hand, I dragged my gloved fingers over my turnout coat to find some kind of debris—I had no damn idea what it was, and at this point I didn’t want to know—sticking out of my left side. I lifted my glove to my sightline to see it smeared with dark crimson.
The gasping whine that echoed in my mask didn’t sound like me at all.
Moretti’s alarm brought me back to my senses. No time.
My pain didn’t matter, not now. I had to work through it.
Groaning, I stayed low to the floor, crawling on all fours to where Moretti lay sprawled and motionless. Every movement pierced the jagged wound in my side, made the heat and the sweat and misery worse. I leaned over him, relieved when I saw the rise and fall of his chest. The orange glow from the fire highlighted the edges of his dark hair, traced the swell of his cheekbones with deep shadows. In the light, I noticed the bright red trickling down one side of his face from somewhere under his hairline.
I tapped his cheek with an open palm. “Moretti,” I called. “Hey, Moretti…come on, open your eyes. Anthony, I need you to wake up.”
Nothing.
“Phoenix!” That was Ramos, her distant shout crackling over our radios. “Moretti! This place is starting to come down!” Well, shit, I hadn’t noticed.
“You have to evacuate now,” Patterson ordered.
“I can’t,” I snapped. “Moretti’s down. He’s…he’s down, but breathing.”
“The stairs are blocked,” Ramos yelled back. “We’re working on it, hang in there.”
Blocked with what? Nothing about this fire made any sense, so why would it start now?
I didn’t know how badly Moretti was hurt, which made me hesitant to move him. But if we didn’t get out of this hallway—no matter how quickly the rest of our team might’ve been working—then we weren’t going to get out of here at all. On my knees, I grabbed the straps of his SCBA and started dragging him around the minefield of burning debris toward the stairs. I grit my teeth against the pain until my jaw ached, exhaling sharply through my nose as I pulled him along with me.
It wouldn’t have been this unbearable if I hadn’t been fucking impaled. Sweat dripped down my forehead into my eyes and I tried to blink it away. With blood loss and the temperature in the hallway, the edges of my vision had turned hazy.
“It’s all right, Anthony,” I said as if he could hear me. “Stay with me.”
The heat flared, a sudden, familiar torrent of hot air passing over us, stoking the same dread I’d felt earlier. A silhouette emerged from the thick smoke and sauntered through the flames, not at all concerned about the heat or the danger of blistering skin and third-degree burns. I peered at the shadow that definitely hadn’t been there seconds before, watching them take shape, the details becoming clearer. A man stood on the opposite end of the hallway dressed in all black, white-gold reflecting off his sleek leather jacket. An arrogant, knowing grin curved his lips into a sneer. He was young. Dangerous.
He’d been with us in the attic.
I didn’t know how, but he’d started this fire. Author Bio:
Jessie Thomas is a writer of young adult and new adult fiction from Buffalo, New York. An avid reader and history nerd at heart, she enjoys writing historical fantasy, urban fantasy, and paranormal romance with atmospheric settings and dark themes. When she isn't chasing her muses around, Jessie can be found playing with her snaggle-toothed cat named Graham.