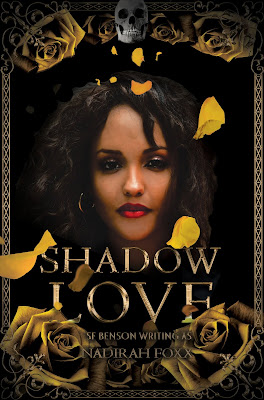 Blurb:
Vampire fangs, vials of dragon’s blood, and tarot cards. Just a few of the oddities found at Vanpeer’s—a metaphysical gift shop found in the French Quarter. But when the owner, Twilight Vanpeer, uncrates an obsidian mirror she’s unprepared for the secrets it unlocks.
The sudden arrival of a tall handsome stranger, Dwade Marks, jostles Twilight’s life. Suddenly, she’s dealing with memories that make no sense. But bad dreams aren’t that serious when that’s all they are. Hers, unfortunately, contain an awareness that needs to stay hidden.
Adding to the weirdness is the fact Twilight is torn between two men—Dwade and her lifelong best friend, Preston Montgomery. One man is the key to her past while the other holds her future.
Things get out of hand quickly when someone starts killing women who look like Twilight. Both men are suspicious but only one can hold her heart.
Twilight has serious choices to make—own up to her past or bury it deep. One option appeases the gods while the other speaks to the shadow found in all of us. 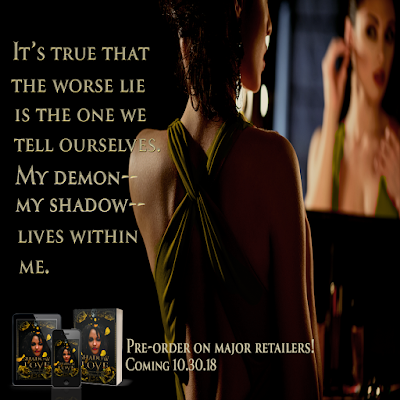 Nadirah Foxx, the alter ego for SF Benson, has a fondness for dark, twisted romance featuring suspense and adventure. Her characters are flawed. But no matter what their obstacles or demons might be they always find a way around them.
Author Links: Facebook: https://www.facebook.com/NadirahFoxx/
Twitter: https://twitter.com/NadirahFoxx
Blog: https://nadirahfoxx.wordpress.com/blog/
Amazon: https://amzn.to/2PRCYu6
Bookbub: https://www.bookbub.com/authors/nadirah-foxx
Buy Links:
iBooks: https://itunes.apple.com/us/book/shadow-love/id1437983504?mt=11
Barnes & Noble: https://www.barnesandnoble.com/w/shadow-love-nadirah-foxx/1129672005?ean=2940155830863
Amazon: https://amzn.to/2O4N3SM
Kobo: https://www.kobo.com/us/en/ebook/shadow-love-5 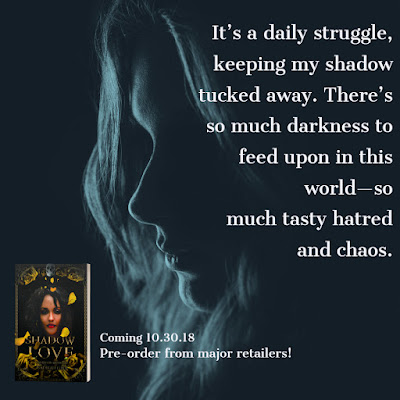 A low voice, almost a shallow whisper, calls to me and I move toward the mirror. I take one last glimpse at Preston as remorse moves through me. When I became aware, I had no intention of ever letting the shadows take over. Unfortunately, Tezcatlipoca forces the issue.
The voice gets louder as the darkness ebbs and flows, taking shape. The sinister shadow, black as night, steps out of its midst. It surrounds me like a death shroud.
“Come to me,” I say directly to its evil core.
Terrors from another time—one after another—fill my mind. I see the moment I made my request of the Lady of the Dead along with her fated words.
“A girl shall be born bearing your sigil. Find this body and regain your powers and knowledge. When Tezcatlipoca finds it, he will guide you. Only he can unite the soul and the body. But beware, Sin-Eater, he will learn your truth. When he does, your soul will return to Mictlán.”
The shadow slinks back toward the mirror but stops just before breaching the surface. A pair of glowing eyes land on me.
It’s time, Sin-Eater.
I inhale deeply, steadying myself. “Tezcatlipoca, something is wrong.”
His arm wraps around my waist, holding me in place. “It’s nothing to fear, Tlazolteotl. It’s just your memories returning.”
The shadow nods, and its eyes drift toward Tezcatlipoca. Pointing at the mirror, I exclaim, “No. This is worse than any memory I’ve ever had. See for yourself!”
He swears unintelligible words, and his head swings toward the black glass. When he does, smoky tendrils rise from the surface and wrap around him. The Aztec god isn’t strong enough to fight against the beast. Unfortunately, I’m forced to watch the scene playing within the smoking mirror.
Quetzalcoatl and Tezcatlipoca were always at war with each other. On that fated night, I created a special brew to intoxicate Quetzalcoatl. Tezcatlipoca had nefarious plans for his brother, but they were cruelly intercepted.
“My lord,” I said as I approached the bare-chested god.
“Drink this and be merry. For there is a young maiden waiting for you in your chambers.”
Quetzalcoatl, always eager for a night of sex, drank cup after cup of the enchanted elixir. When I was certain he was thoroughly intoxicated, I led him into his room.
He lowered his body onto the petlatl and allowed me to undress him.
The plan was for the god to mistakenly commit incest by sleeping with his sister. Tezcatlipoca had the unsuspecting girl drugged so that she would fall asleep in her brother’s chamber.